Last week we received some very exciting news. Matt McMullen, a student who visited our Conservation Estate at Dundreggan to research the topic of rewilding, had taken a walk through the woodlands there and spotted a red squirrel! We haven't seen red squirrels there previously, so this was very welcome news, if a little surprising. The woodland in this part of Dundreggan is predominantly birch, and although red squirrels will feed on birch catkins in spring and summer, it is not a key food species for them, so woodlands such as this are not usually considered suitable habitat. 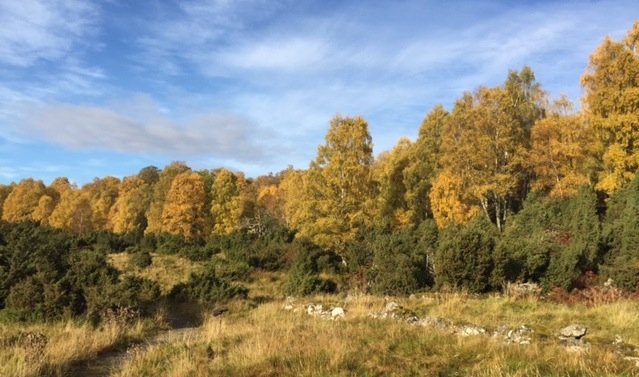 The birch-juniper woodlands at Dundreggan, near where the squirrel was seen.

Red squirrels feed predominantly on the seeds of trees – either cones from conifers such as pines and larches, or those from broadleaf trees such as oak (acorns) or hazel (nuts). Scots pine is a key food source for squirrels in the UK and although there are some Scots pines scattered throughout the birches, we hadn't previously thought that there would be enough in this part of the woodland to support red squirrels.

Upon investigation, we found that the tree that the squirrel had been feeding in had a bumper cone crop. Seed-producing trees can be ranked on a scale of 0-5, with 0 being a failure to produce any seed and 5 being packed full. This tree scored a 5, with other ones in the vicinity also scoring highly. The new season's cones are now available on Scots pines, full of lipids (fats) and carbohydrates, which provide squirrels with a high energy food source for winter. Evidently the excellent cone crop on the few pine trees in the woodland must have been enough to attract an adventurous squirrel, perhaps a young disperser from a nearby population. It will be very interesting to see whether it remains in the area – although there isn't enough suitable habitat to support a substantial population of red squirrels, a small number could probably survive there.

What the squirrel was after – energy-rich new green cones on the few Scots pines that are scattered amongst the birches.

The easiest way to tell whether squirrels are present is to search for eaten cones – squirrels strip the scales off cones in a very characteristic way, quite differently to mice or birds. The photo below shows the cones that this squirrel had been feeding on and we will continue to search for these over the coming months, as well as checking for dreys once the leaves fall from the trees.

The scales that the squirrel pulled off the pine cones to get at the seeds and the remaining stripped cones.

The natural colonisation of new habitat shown by this squirrel further highlights the importance of our Red Squirrel Reintroduction Project. It shows that where there are existing forest corridors, squirrels can spread to new areas. However, forests which are isolated from current squirrel habitat, such as many on the west coast of Scotland, cannot be reached naturally. Over the next three years, by moving small numbers of squirrels from areas where they are thriving to suitable habitat in the northwest Highlands, our project will create ten new populations of red squirrels. These populations will be free from the threat of non-native grey squirrels and diseases such as squirrel pox, providing a much-needed boost to red squirrel conservation in the UK. 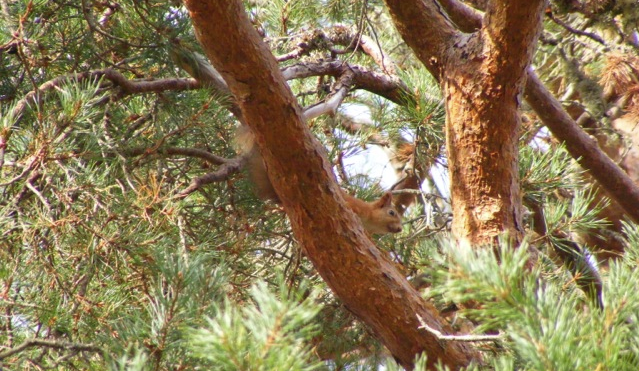 The red squirrel at Dundreggan – let's hope it stays for a while! Photo by Matt McMullen.