The Scottish wildcat, cat fiadhaich in Gaelic, is no household moggy and has always been regarded with a certain respect by humans on account of its legendary ferocity when cornered. Take a look at a wildcat – a photograph is the best view most of us will get of this elusive predator – and you might see not only the classic air of feline independence, but something else as well: an indomitable, untouchable wariness, and possibly (allowing for a hearty dose of anthropomorphism), a ‘don’t mess-with-me’ expression! 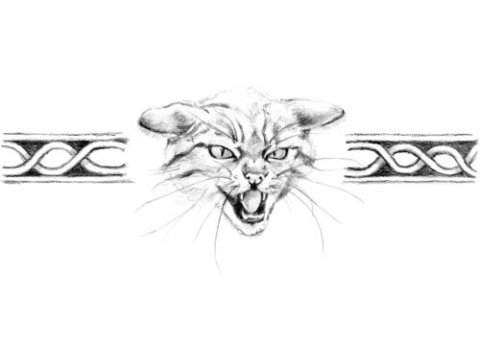 Reputed to be untameable, the ‘British tiger’, as it is sometimes known, has an honoured place in Highland culture. Early on in Scottish history, Caithness and Sutherland formed the Pictish province, Cataibh, meaning land of the Cat Tribe or Catti. Caithness still retains an obvious echo of that name. The Duke of Sutherland’s Gaelic title is Morair Chat, meaning ‘The Great Man of the Cats’. There is a cat in the clan crest, and their motto is ‘Sans Peur‘ (‘Without fear’). Other clans have similar themes, reflecting a respect for this animal’s fierce spirit. The Clan Mackintosh crest also features a feisty-looking cat, with the motto ‘Touch not the cat bot (bot meaning ‘without’) a glove’, and for the Clan MacGillivray the motto is ‘Touch not this cat’. The wildcat was a totem of a number of other early Celtic tribes, including the Irish ‘cat-heads’ – possibly warriors who wore cat skin over their battle helmets.

Although wildcats are mostly silent, their haunting mating calls were probably responsible for at least a few ghost stories! In Scottish folk tradition, cats in general were closely observed for the omens they might reveal. For example, a cat washing behind its ears was thought to be followed by rain (although the sceptic might point out that cats washing behind their ears, and rain in Scotland, are both pretty frequent occurrences!). A more disturbing method of divination used by Celts in Scotland was called taghairm. This involved roasting a live cat over a fire while other cats were supposed to relieve its torment by answering the questions a person asked.

One Highland legend tells of the Cat Sidhe, a fairy cat, believed to be a witch in disguise. The king of the Cat Sidhe was called Big Ears, and was said to preside over the answering of questions during the taghairm.

In Morayshire there have been confirmed reports of ‘Kellas Cats’, which are thought to be hybrids between wildcats and feral domestic cats. These black cats have much of the ferocity of true wild cats and there is a formidable-looking specimen in Elgin museum!

An Irish legend tells of a cat that dwells in the Otherworld called ‘Little Cat’. This animal guards some much-coveted treasure, and while looking fairly innocuous, its response to would-be thieves is to transform into a shooting arrow of flame, reducing the culprit to ashes – an excellent security system if ever there was one.

In modern fiction the wildcat makes a notable appearance in Phillip Pullman’s book, Northern Lights, as one of the favourite animal forms adopted by the heroine Lyra’s daemon, reflecting her bold and fiery spirit.

Wildcats have continued to invoke awe and respect until recent times. Such was the wildcat’s strength when fighting three terriers, that Scottish naturalist Charles St John commented: “if a tame cat has nine lives, a wildcat must have a dozen.” But in spite of those ‘dozen lives’, the wildcat is now struggling for survival. Over the centuries it has been hunted for its fur and persecuted by gamekeepers. One of today’s major threats is interbreeding with feral domestic cats, which is pushing it to the brink of extinction.

While many old beliefs may seem strange to us today, perhaps the most bizarre thing of all is that in a nation of cat lovers, so few are aware of the plight currently facing the Scottish wildcat, one of the planet’s most endangered felines.

Kitchener, A. (1991) The Natural History of Wildcats. Christopher Helm.

Thompson, F.G.(1978) A Scottish Bestiary: the Lore and Literature of Scottish Beasts. The Molendinar Press: Glasgow.