Of old the aspen was a tree of heroes, whose crowns of trembling leaves gave them the power not only to visit the Underworld, but also to return safely.

Similarly, the aspen crowns people placed in ancient burial mounds may have been to allow the spirits of the deceased to return to be reborn. 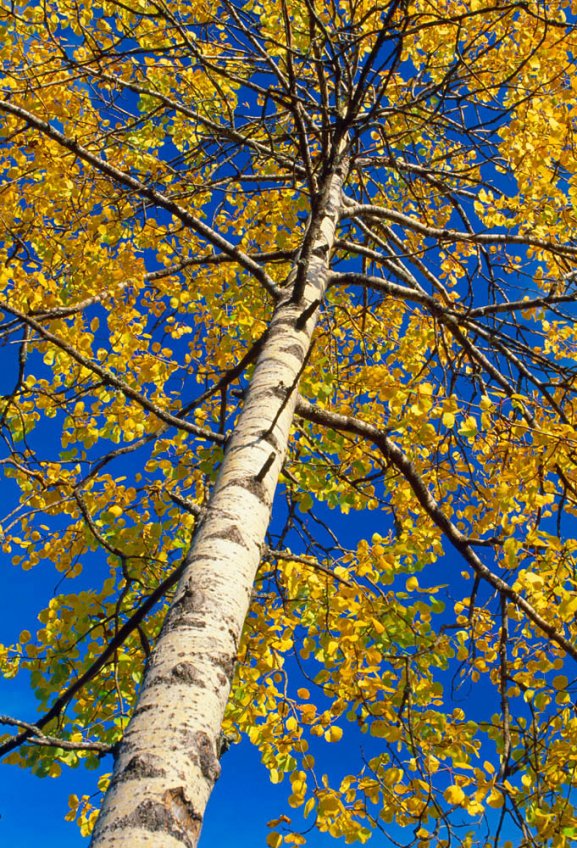 Aspis, the aspen’s Greek name, means shield and amongst the Celts its lightweight wood was indeed favoured for making shields. These shields were more than mere physical barriers between warrior and enemy. People thought they had magical qualities to safeguard the bearer from psychic as well as physical harm. The protective nature of the “shield tree” extended to the general population too. Like the rowan, it was a popular choice of tree to plant close to a dwelling. Aspens were also said to be able to protect buried treasure.

The Latin name of the aspen is Populus tremula, the trembling poplar. The aspen has distinctive round leaves with wavy edges and pale undersides. They grow on long, flattened stalks giving the tree the appearance of shimmering in the wind. They also make a distinctive rustling, whispering sound “. . . as if they were spattered by rain” (Mabey, 1996). In many cultures and religions people associate the wind with the voice of Spirit. In the boughs and leaves of the aspen the wind finds a distinctive voice to inspire those who would listen. The movement of the wind through the canopy and the sun dappling through the leaves can have a mesmerising effect. This can encourage a contemplative and meditative frame of mind. Aspen’s magical reputation has “done much over the years to facilitate legends of people disappearing from under it into the land of Faerie” (Paterson, 1996).

Aspen’s Gaelic name is critheann (pronounced cree-an) as in Sron a crithean in Ardgower, (the Gaelic verb for tremble being crith). Highlanders also thought of aspen as a magical tree. An aspen leaf placed under the tongue would make the bearer more eloquent, traditionally a gift of the Faerie Queen. Furthermore there were several Highland folk taboos, including those against using the wood for fishing or agricultural implements, or in house construction. These suggest that the aspen may have been considered a faerie tree on a par with the rowan which has similar taboos. Sadly, trees afforded such pagan respect often suffered a reversal of fortune in Christian mythology. Thus, all things Faerie became evil and the poor aspen tree was said to tremble in shame for having supplied the wood for the Crucifixion Cross. It seems a shame that this beautiful tree became associated with fear and loathing.

On a practical level the aspen’s uses to humanity have been limited. Aspen wood is very lightweight when dried, becoming especially buoyant and was thus a popular choice for oars and paddles. Its lightness also made it useful for surgical splints and wagon bottoms. Its softness and lightness, though ideal for sculpting, are not suitable for use in building. However floorboards were sometimes made of aspen as a safety measure, as aspen wood does not burn well. Aspen shoots and leaves are popular with grazing animals, and hand gathered aspen leaves were fed to cattle when other food was scarce.

The Bach Flower Remedies recommend extracts of aspen to treat fears and apprehensions. Indeed the beauty of the aspen’s shimmering bright green summer canopy, turning to autumnal gold, is enough to gladden any heart.